Poetry formed the heart of French literature during the Renaissance. It was the subject of research, exploration, incorporated medieval heritage and inspired by Italian poetry and ancient models: it was both innovative and inclusive with myriad influences. 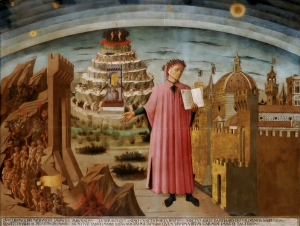 did you say "POetry"?

Despite being a key research and theory subject, the word "poetry" didn't exist in the early 16th century.

The word "poetry" comes from the Greek "poiesis" and the verb "poiein" meaning "to make". So poetry is "making literature" and poets are wordsmiths. This form of literature had a very different name until the late 15th century: it was called "versification" and a "versifier" was an artisan employed by the royal court's "high rankers" to study the history of their benefactors' family and produce plays on words and entertainment. "Versifiers" or "rhétoriqueurs" focused primarily on style and form, sometimes to the limits of what the tongue is capable of... And it didn't matter if it made sense.

The following century, poets may still have been financially dependent on "high rankers" but they had more freedom of inspiration and imagination due to the influence of Renaissance Italy's patrons who saw poets as independent artists.

There have been two definitions of poetry since Antiquity. It is a formal and metrical exercise as well as a work of fiction, a heavy and suggestive portrayal that creates a universe.

The humanists introduced Neoplatonism to France in 1540 and it brought fictional poetry to the fore. Plato believed poets were more than just "versifiers", they were inspired beings whose work was fuelled by divine enthusiasm, by "the Love which moves the sun and other stars" (last line of Dante's Divine Comedy).

Poetic creation was seen as an inspired passion: in Art poétique, Jacques Peletier Du Mans describes poets as the interpreters of the gods who have the ability to understand divine secrets and translate them to mankind.

Poetry set the scene for "revelation": the text requires its readers to decipher and understand it to unlock the world's beauty.

As Ronsard put it in his Ode to Michel de L’Hospital, in 1552 (Ode X in Premier Livre des Odes, Epode): 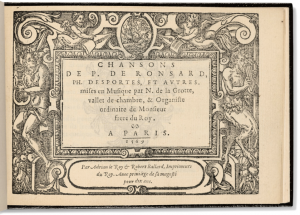 Music would create the vital connection between audiences and poetry to get the full effect of the universe's cosmic forces. Ronsard asked his readers to sing his poems as "poetry without instruments or without the grace of one or more voices is not at all pleasant": recitation and expressive reading were given pride of place.

So 16th century poets had to consider their poetry's musicality and give their verses harmony. Ronsard always believed music and poetry should be together:

"Poetry without instruments or without the grace of one or more voices is not at all pleasant, any more than instruments without being animated by the melody of a pleasant voice." (Abrégé de l’art poétique, 1565)

AN OFFICIAL REVIVAL : A NEW FORM OF SENSITIVITY

In the 16th century, mainly from 1530, Renaissance poets unshackled themselves from the fixed forms that existed in the Middle Ages: the rondeau, ballad, rhymes etc. So Ronsard tried to give each of his poems in his Livres des Odes a new and different form.

At the same time, the alexandrine in "rimes plates" (AABB) flourished as it flung out the modern foundations of classical poetry.

That said, one fixed form remained popular: the sonnet. The form of Italian origin was introduced by Clément Marot and spread among the Pléiade in the 1550s to become a benchmark in French poetry. It stands out from medieval fixed forms as it's based on  tension between two quatrains in "rimes embrassées" (ABBA ABBA) and two tercets with three rhymed lines in a rimes libres scheme (CCD CCD CDC…): that makes it a semi-fixed form that winds down as it goes on as we move from a fixed form (2 quatrains in rimes embrassées) to a free-rhyming tercet scheme.

The 16th saw the rise of modern French. Poetic language played an "avant-garde" role in burgeoning modern French: the Pléiade poets wanted to use their studies of words, neologisms and constructions to elevate the French language.

(books available to buy at the Prieuré Saint-Cosme gift shop):

Ronsard’s library, épisode 1 : the greek poets Pierre de Ronsard was an avid reader before becoming a prolific writer. He left the marks of his reading in his […]

all
In the priory collections: Marc Antoine Muret

In the priory collections : Marc Antoine Muret Nowadays it’s hard to grasp all the allusions to ancient myths and Antiquity authors in Ronsard’s poetry. But don’t worry, […]